Design a site like this with WordPress.com
Get started
Skip to content
Doctor Weasel Political Violence January 7, 2019January 7, 2019 2 Minutes

This is the latest post in a series on political violence.  As with parts 1, 2, 4, 5, and 7, this post focuses on violence, threats of violence, and harassment coming from the political left.

Is this a threat?
https://www.thecollegefix.com/university-clears-professor-who-wrote-on-facebook-about-hating-white-people/

CNN commenter fired after calling for violence in the Middle East
https://www.foxnews.com/entertainment/cnn-drops-marc-lamont-hill-anti-israel-remarks

“I’m known to do this shit for real,” an antifa protester said to me. “Are you willing to die for Youtube shit?…Death is coming to you.” pic.twitter.com/bhK2wWkMBD

This was an assassination attempt, even if a clumsy one
https://www.foxnews.com/us/north-dakota-man-reportedly-admits-stealing-forklift-planning-to-flip-trumps-limousine-to-kill-the-president

A pleasant reminder to the center-left from the far left 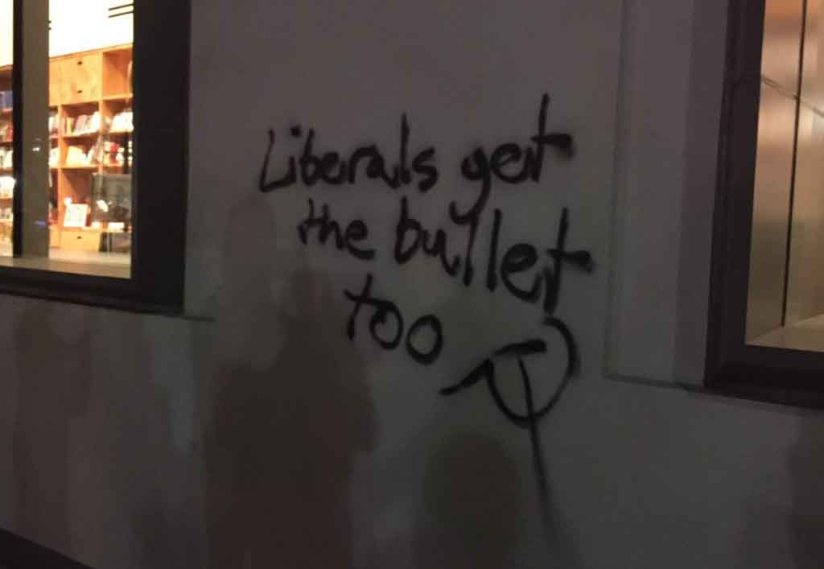 A reminder that violence at campaign Trump rallies was instigated by the left, specifically Robert Creamer
https://www.breitbart.com/politics/2016/10/17/exclusive-okeefe-video-sting-exposes-bird-dogging-democrats-effort-to-incite-violence-at-trump-rallies/

Leftists raising money for violent revolution
https://farleftwatch.com/far-left-extremists-are-raising-money-on-patreon-to-inspire-insurrection/
Sane liberals won’t be spared the wrath of the insane/evil left. “This is why liberals get the wall too.”

Memorial for Pittsburgh synagogue victims vandalized (by leftists) at Pomona College
https://www.jns.org/memorial-for-pittsburgh-synagogue-victims-vandalized-at-pomona-college/
“What makes matters worse is that while the anti-Semitism that comes from the extreme right is promptly acknowledged and condemned by university leaders, the anti-Israel anti-Semitism that comes from the extreme left, which is what we see a lot of on campus, is often excused as political speech and permitted,”

Antifa member on trial wonders why she’s not treated like a hero for her assaults.
https://dailycaller.com/2018/12/19/antifa-lady-court-wont-dismiss-wwii-hero/

Update on the lefty doxxer. Remember, putting peoples’ private info out there is an invitation for other lefties to commit violence.
https://www.thecollegefix.com/grad-student-who-doxxed-republicans-had-terabytes-of-highly-sensitive-data/
“I own EVERYTHING … If you tell anyone I will leak it all. Emails signal conversations gmails. Senators children’s health information and socials.”

Guy rams Catholic church with his car. Crazy? Leftist? Unclear as yet.
https://pjmedia.com/trending/community-rallies-after-man-deliberately-rams-portland-church-with-suv-on-christmas-eve/

All she did was post some pictures! Death threats and doxxing
https://pjmedia.com/trending/student-deluged-with-doxxing-and-death-threats-after-pro-gun-graduation-photos/
https://www.blazingcatfur.ca/2019/01/02/student-deluged-with-doxxing-and-death-threats-after-pro-gun-graduation-photos/

It’s not a joke coming from the political allies of an actual assassin.
https://pjmedia.com/trending/ocasio-cortez-fans-joke-about-assassinating-steve-scalise/

Euro Antifa as bad as the American variety
https://www.zerohedge.com/news/2019-01-07/graphic-chairman-germanys-far-right-party-brutally-beaten-within-inch-his-life